The fact that this picture showed up at all in my e-mail is amazing.  As I have described before, my e-mail has not accepted any new pictures from my phone in months, which is why the picture content of this blog has slowed down.

Concerning stones there are other realities or realms coinciding with the every-day/ mundane realities that most do not perceive.  "Spiritual realms" so to speak.  As I talked about a few posts back, indigenous rock art, stone building, rock pile and stone row sites, etc. is in some ways (perhaps an under-statement) inter-related to this concept, a subject we will explore further in another post.   For instance, why would a person, or a group of people construct a "serpent row" of stones if they did not perceive a specific energy or experience around the site in the first place.  Also see one of Peter Waksman's latest posts on his Rock Piles blog about "The Origin of the Word Goof or Goofing" here- http://rockpiles.blogspot.com/2016/05/the-origin-of-word-goof-and-goofing.html

This Stone Spirit is located in Milford, MA.  At this time I do not have the other pictures of nearby rock piles and stone walls that goes along with it.  But this is a very significant feature in and of itself.  The boulder is a Rock Stack on top of a small hill or ledge, perhaps even a mound.  I see the Rock Stack as a Guardian Spirit, watching over the site.  Notice the facial profile in the rock- the clearing away for the facial feature, the eye slit, nose, mouth slit, etc: 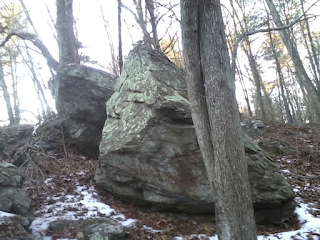 Also for comparison, at the other end of town in Milford, MA., is another Guardian Spirit Stone I have documented that is very identical in nature to the above picture.  The post is linked here:

Pictures 1 and 4 are the Guardian Stones I am talking about specifically, which I will show again here:

More Milford MA. Spirit Stones from the other end of town: 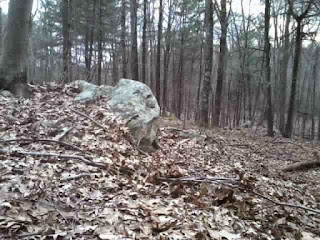 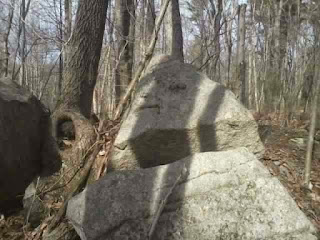 Posted by Matt Howes at 9:06 PM No comments:

To fully grasp this post it would probably be necessary to read the following time-line here:

I have read in some history about Martha's Vineyard (an island in the Atlantic off the Massachusetts/ Cape Cod Coast) that it was separated from the mainland by sea level rise (floods and earthquake) some 5,000 years ago.  And if you look at the above timeline you will notice that Native people in the Northeast region were definitely dealing with floods after the "Ice Age" 9,500- 10,000 years ago.  And they appear to be a fully developed culture as far back as 11,500 years ago directly after the Ice Age indicating they were survivors of a catastrophe that had to re-organize.  Research the Red Paint People aka "Maritime Archaic"- these ancestral people were known for building in stone (stone burial mounds and enclosures), erecting coastal standing stones and deep sea fishing.  This is confirmed by mainstream archaeology.

Maritime Archaic cultures obviously lived by the coast.  This is a pattern we see in all cultures around the world.  It is the best resource of food, and even long distance travel.  But when faced with a major flood, where are you going to go?  Most likely, if one has the will to survive, you are going to head in-land and to a high place.

Many researchers today seem to be scratching their heads about why certain areas are "hot-spots" for Native StoneWorks such as cairns, mounds, enigmatic wall complexes, standing stones, chambers, shrines, etc.  Take for example the headwaters of the Charles River by the Milford, Hopkinton, Holliston, Upton (etc.) town lines in Massachusetts.  The place is known as a stoneworks "hot spot."  But this should be no mystery.  The answer, at least in part, should be obvious.  During times of great catastrophe many thousands of years ago, the headwaters of the Charles River by Milford/ Hopkinton would be an obvious place to go inland, a place to be safe and to re-settle.  The area also has a lot of high hills, in fact it is the highest spot in the immediate region between Boston and Worcester.  Some groups of people obviously remained in such areas (in general) whereas others probably left to re-settle other areas.  Other examples other than the headwaters of the Charles River would be the Concord MA. area by the Concord River, the Quinepaug River in CT., etc. etc.

I do believe that such areas sustained people's lives in ancient times of floods and earthquakes.  These places certainly were not (and are not) forgotten by Native people.  For instance, during the spring people would meet up for the fish runs.  This sustained their lives.  But I am proposing that it was probably remembered by Native people that such places sustained their ancestor's lives on a much deeper level.  So of course such areas are going to be hot spots for stone-works, this should be no big mystery to understand.

However, with colonialism (and pre-colonialism, i.e. European fishing fleets, expeditions, etc.) entire villages vanished through disease- an 80-90% fatality rate.  Later war and slavery.  The line of descendency hasn't been passed down in a lot of cases- it is impossible to know the names of many people and family lines.  This is a sensitive issue so I will only say it briefly.  Some customs and knowledge was lost, while some was retained.  After the colonists established themselves it is nearly impossible for Native people to relate to the land and practice their customs as their ancestors did.  However a lot of resilience did endure.  For instance in the early 1700's in the Medway/ Holliston/ Milford area it is recorded, very generally and in a passing comment, disputes between white land owners and Native people (see Milford town historian Adin Ballou's book in the Milford Town Library.)  Perhaps places of ceremony as well as fishing/ hunting rights were being infringed upon.  This shows a continuous ceremonial and traditional land use by Native people.

That last paragraph was really just meant as a side thought.  When walking through the hills and ledges of the Upper Charles River, and seeing the traces, faint and apparent of Native culture, the keywords "beginning place" or "new beginning place" kept coming to mind.  With the history of floods and earthquakes deep in this region's past, it is no wonder why.  And on a last side thought it would be worth mentioning- if you are good to your environment it will be good back to you.  In ancient times in this region, the river systems were like high-ways.  It is shocking today to see the total dis-respect and dis-regard for nature.  One can no longer go around the river and water-ways the way Native people used to.  Therefore they could not be as steadily relied upon in a time of catastrophe.  Many people today would be stuck in cities with no hope of survival.  Also when people and companies, such as in Milford MA. blow up whole rock ledges to smithereens and dig huge holes into the Earth, they are causing an imbalance in nature.  Once it is gone we can never get it back, and they are de-stabilizing the land base without even thinking of what they are doing.  Making and using this modern machinery in this way is clever, but it isn't smart.  Furthermore the foremen of these places talk like a bunch of angry apes- there is no kind or gentle inflection or rhythm in their voices, they have been de-nuded and de-sensitized to the natural rhythms of life around them and perhaps within themselves.  There is no wisdom or higher purpose that serves their end.  As we will see in the next post, according to a dream I experienced, the Spirit of this land is, was and always will be Native.

Posted by Matt Howes at 4:09 PM No comments: